Founding of the Academy

Agreeable to notice, publicly given, the citizens of Blairstown and vicinity convened in the Presbyterian church, in Blairstown, this day, for the purpose of selecting a site for an Academy, and appointing a committee whose business it shall be to superintend its erection…The hilltop west of the Methodist Church and south of the burying ground in Blairstown was selected for the site of the building, and was offered gratuitously for the purpose by the possessor, John I. Blair. BLAIR ACADEMY, A SESQUICENTENNIAL HISTORY BY ARTHUR T. HAMLIN ’29 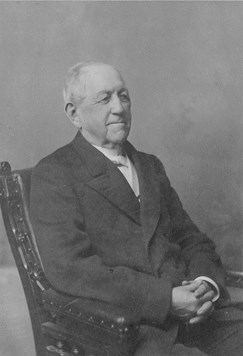 Blair Academy was founded in 1848, when Mr. John Bunnell, a local carriage maker, and the Rev. John A. Reiley, pastor of the First Presbyterian Church, began the enterprise of establishing a school in Blairstown. According to a history of the School written by John C. Johnson for its 50th anniversary, Mr. Bunnell “seems to have been the first to urge the importance of the project,” while Mr. Reiley “threw his whole soul into what he deemed best for its (the school’s) welfare.” Successful and respected local businessman and church member John Insley Blair (pictured at right), who would become a railroad tycoon later in life, was the third of “three men worthy of especial commendation on account of their successful zeal in behalf of the institution in its infancy.”

Mr. Bunnell, Mr. Reiley and Mr. Blair met on April 6, 1848, and the co-founders agreed upon the school’s hilltop site, adjacent to the village of Blairstown. The land and one-third of the cost of a small building, known today as the Old Academy, were given by Mr. Blair, and soon the Blair Presbyterial Academy began educating boys and girls from the surrounding community.

John I. Blair remained the School’s principal benefactor for a half-century, and his philanthropy facilitated Blair Academy’s early growth and even re-established the School when it would have otherwise foundered. Buildings including Insley Hall and Locke Hall were erected in the late 1800s, and Mr. Blair’s son, DeWitt Clinton Blair, funded campus expansion and improvements, including the construction of Clinton Hall, in the early 20th century.

Through the years and until the present day, the philanthropy of countless alumni, parents and friends has sustained and strengthened the School and made possible its continued evolution. In 1992, the School was entered into the National Register of Historic Places in recognition of its historic and architectural significance.

From its founding and through its original deeds of trust, Blair Academy has always been associated with the Presbyterian Church, specifically, the Presbytery of Newton. Blair was coeducational until 1915, when it became an all-boys’ school. Coeducation was reinstated in 1970, and today, the School welcomes a diverse student body comprising 460 college-bound young people from a multitude of backgrounds.