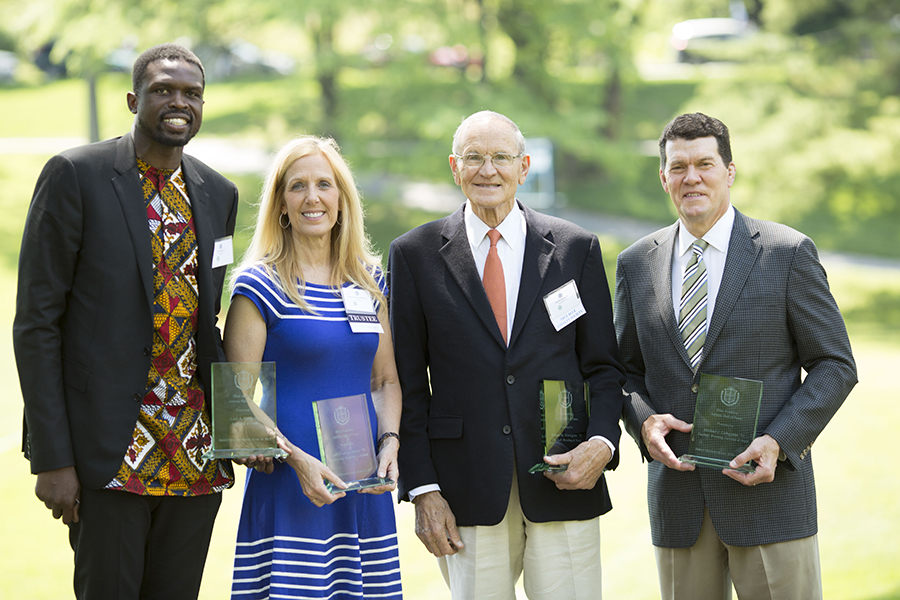 A three-sport varsity Buccaneer, Col. Novogratz ran track, wrestled and played offensive tackle and linebacker on Blair’s undefeated 1955 football team during his one year at the School and went on to achieve football greatness at the U.S. Military Academy. He was a linebacker and guard for the Black Knights in 1957 and 1958, helping the team notch a 15-2-1 record during those two years, including an undefeated season in 1958. As a senior cadet in 1958, Col. Novogratz was selected to the College Football All-America Team as a first-team guard, was chosen to compete in the East-West Shrine Game and received recognition as the nation’s outstanding lineman by winning the Knute Rockne Memorial Trophy and a Los Angeles Times award. He also earned two varsity letters as a heavyweight Army wrestler and finished third in the Eastern Intercollegiate Wrestling Association (EIWA) championship in 1959. Col. Novogratz served for 30 years in the U.S. Army and was inducted into the West Point Athletic Hall of Fame in 2011.

Captain of the Bucs’ football and wrestling teams and an undefeated wrestler his senior season (1970-1971), Mr. Lieberman also ran track and played lacrosse, earning a total of 12 varsity letters during his four years at Blair. He was an all-around School leader with perfect attendance, serving as a prefect, table foot, admission tour guide, class officer, and senior leader and soloist in the glee club and Tweeds. At graduation, Mr. Lieberman received the Phillip James Rosen Trophy, the Outstanding Athlete award and the Headmaster’s Prize, given annually to the senior class member who has conspicuously displayed loyalty to the School, outstanding leadership, sportsmanship and Blair spirit in athletic competition. He matriculated at Lehigh University, where, as a four-year starter, he became wrestling team captain, earned an NCAA national championship at 177 lbs. in 1975, and was named first-team All-American and third-team All-American in 1975 and 1976, respectively. Mr. Lieberman was the first-ever Midlands tournament placer for Lehigh, placing fourth on two separate occasions. His career wrestling record at Lehigh was 66-17-1, including a 46-3 run his junior and senior years, and he earned two EIWA titles at 177 lbs. He has been inducted into both the Lehigh and EIWA Halls of Fame. Mr. Lieberman has continued to faithfully serve Blair as an alumnus: He has been a class representative for the class of 1971 for more than four decades; he chaired 1971’s reunion committee 10 times; he served on the Board of Governors for five years; he has hosted Lehigh Valley parent and alumni events; and he participated in Blair’s strategic planning process. Mr. Lieberman was co-recipient of the 2011 Volunteer of the Year Award at his 40th Blair reunion.

Mrs. Morris earned 12 varsity letters during her four-year Blair career and captained the varsity field hockey (1974 and 1975), basketball (1974 and 1975) and softball teams (1975). She made north Jersey all-area teams in field hockey and basketball as a junior and senior and the New Jersey all-state basketball team as a senior with an average of 17.6 points per game. An outstanding member of the Blair community, Mrs. Morris received three top honors at graduation: the Blair Academy Trophy, awarded to the member of the senior class with the highest all-around achievement; the Best Female Athlete award; and the Robert Dalling Prize for having best represented Blair in athletic competition. Mrs. Morris is the first and only female athlete in Blair history to receive the Robert Dalling Prize as the School’s top overall athlete—the year after her graduation, Blair established the William Zester Memorial Award for the top female athlete and designated the Robert Dalling Prize for the top male athlete. Continuing her stellar athletic career at Bucknell University, Mrs. Morris played JV field hockey as a freshman and varsity basketball for three years until a back injury forced the end of her basketball career at the start of her senior season. Upon graduating from Bucknell, Mrs. Morris joined Blair’s faculty for two years as a history and economics teacher, dorm parent in Locke Hall, and field hockey and basketball coach. A class representative since 2010, Mrs. Morris served on the Board of Governors from 1999 to 2003 and as a Blair Trustee from 2003 to 2009.

Winner of 11 varsity letters, Dr. Parrott was selected to the first team all-prep field hockey team, the second team all-prep basketball team and twice to the first team all-prep softball team as a Buccaneer. She was a School leader, serving on Blue & White Key Society and as captain of the field hockey and softball teams. At her 1997 graduation, Dr. Parrott held the School record for strikeouts in a season as a softball pitcher and was awarded the William Zester Memorial Award as the female athlete who best represented Blair in athletic competition. She continued her athletic career at Brown University where, to this day, she holds the school softball record for runs-batted-in (103 from 1998 to 2001); stands third place overall for hits and home runs; and is tied for second in doubles.

Mr. Deng fled war-torn South Sudan with his family in 1990 and came to Blair as a freshman from the United Kingdom in 1999. He ran track and played four years of varsity basketball at the School, serving as basketball team captain and earning selection to the 2003 McDonald’s and Parade magazine all-American teams. As a senior, he was ranked second (behind LeBron James) of the 100 top high school basketball players by a host of publications, and he committed to Duke University. Mr. Deng played for the Blue Devils for one season (2003-2004), during which he scored an average of more than 15 points per game; led all Atlantic Coast Conference freshmen in scoring, rebounding and field goal percentage; and played in the NCAA Final Four. He entered the NBA draft in 2004 and was selected seventh overall. During his NBA career, Mr. Deng has played for the Chicago Bulls (2004-2014), Cleveland Cavaliers (2014), Miami Heat (2014-2016) and Los Angeles Lakers (2016-present). He is a two-time NBA All-Star (2011 and 2012), and he played for Great Britain in the 2012 London Olympic Games. Mr. Deng established the Luol Deng Foundation in 2005, a nonprofit that uses basketball as tool to give hope to athletes in Africa, the United States and the United Kingdom. He has been recognized for his philanthropy and dedication to human rights with the NBA’s Joe Dumars Trophy sportsmanship award (2006), the Midwest Light of Human Rights Award (2010) and the NBA’s J. Walter Kennedy Citizenship Award (2014). At Blair, Mr. Deng was the recipient of the Haskins Basketball Prize; the Lee Rose Memorial Trophy, awarded to the senior, who, while performing with merit in the classroom, made significant contribution to Blair life; and the Robert Dalling Prize, presented to the male athlete who best represented Blair Academy in athletic competition. His basketball jersey, number 33, was retired at Blair during a special ceremony at Alumni Weekend in 2009, along with the jerseys of fellow NBA players Charlie Villanueva ’03 and Royal Ivey ’00.