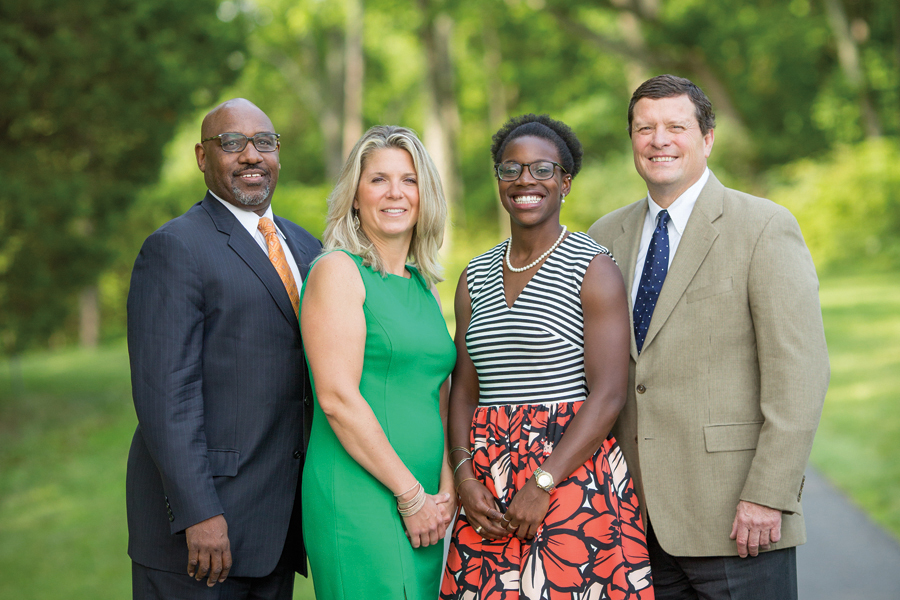 At Blair, Mr. Sabol excelled in football, swimming and track, and set World’s Interscholastic swimming records in both the 40- and 100-yard freestyle races as a senior. He continued his swimming career after accepting a scholarship to The Ohio State University and was selected to the 1936 Olympic team but refused to compete in Nazi Germany. Mr. Sabol founded Blair Motion Pictures in 1962, a company named for his daughter, who, in turn, was named for the School he loved. Two years later, he re-christened the company NFL Films and, in his role as founder, president and chairman, revolutionized how sports were filmed and presented. Mr. Sabol was inducted into the Pro Football Hall of Fame in 2011, and he is the only Blair alumnus to achieve that honor. He died at the age of 98 in 2015.

Mr. McLean was a top basketball, track, cross-country and soccer athlete at Blair. He was the first Buc to score 1,000 points during his Blair basketball career, serving as team captain and earning first team all-state prep honors his senior year. On the track, Mr. McLean was the School record-holder and prep state champion in the two-mile run (1970 and 1971), and the School and state record-holder and prep state champion at 880 yards in 1973. His cross-country honors include prep state co-champion and the School course record in 1970. Mr. McLean continued to excel at Bucknell University, where he played varsity basketball for three years, serving as team co-captain during the 1974-75 season. He is the only Bucknell athlete ever to win an individual NCAA title, having won the 800-meter run championship in 1976. To this day, Mr. McLean holds the university, IC4A Championship meet and University of Pennsylvania Franklin Field records at that distance (1:45.34). Among his other accomplishments, the All-American honoree was fifth in the 800-meter run at the 1975 Pan American Games, a finalist in the 1976 U.S. Olympic trials and was ranked fifth in the world in the 800-meter run in 1977. Mr. McLean was inducted into Bucknell’s Athletic Hall of Fame in 1983.

A Blair and Lehigh University wrestling legend, Mr. Lieberman won the National Prep Championship (1972, 1973 and 1974), USA Wrestling Junior National Championship (1973), NCAA Championship (1978 and 1979) and USA Wrestling Athlete of the Year (1978). His career on the mat also included a win at the national AAU tournament, World Cup gold and silver medals, a Pan Am Championships gold medal and three U.S. National Open Championships, including winning the Outstanding Wrestler and Most Falls awards in 1978. At Blair, Mr. Lieberman received the Headmaster’s Prize, the Jamieson Wrestling Prize and the Robert Dalling Prize, an award named for his first Blair wrestling coach and given to the male athlete who best represents the School in athletic competition. In addition, he was the first NCAA champion produced by Blair’s mathematics and science teacher and legendary USA Wrestling Coach of the Year Tom Hutchinson. Described as “the guttiest and the best” college wrestler in a 1979 Sports Illustrated feature, Mr. Lieberman is a member of the Lehigh, Pennsylvania, and Eastern Intercollegiate Wrestling Association (EIWA) Halls of Fame. He served Blair Academy as a member of the Alumni Board of Governors and Board of Trustees (2002-2004).

An exceptional three-sport athlete who earned 11 varsity letters during her Blair career, Mrs. Tipton was a starter on Blair’s first girls’ soccer team, as well as the basketball and softball teams. As a basketball player, she was named first team all-state three years in a row and was a two-time captain of the team. She excelled as a softball shortstop and pitcher, earning all-state honors her junior and senior seasons. Mrs. Tipton was recognized for her dedication to Blair athletics with the Brooks Basketball Prize, Stowell Softball Prize and the William Zester Memorial Award, given annually to the outstanding female athlete in the graduating class. She continued her basketball career at Division I Columbia University, serving as team captain during the 1995-96 and 1996-97 seasons.

Ms. Adrien competed in soccer, basketball, track and softball, earning 11 varsity letters during her four years at Blair. She captained the girls’ soccer and basketball teams as a senior, posting impressive scoring records in both sports as she notched 56 career soccer goals and became the second Lady Buc in School history to score more than 1,000 points in basketball. Ms. Adrien earned all-MAPL honors four times in soccer and twice in basketball and all-state prep honors twice in soccer. She received the Headmaster’s Prize and was recognized for her Blair athletic accomplishments with the Senior Athletic Award, Blair Soccer Award, Brooks Basketball Prize and William Zester Memorial Award. Ms. Adrien continued to play soccer and basketball at The College of Wooster and soccer at Ithaca College.