Blair soccer is rich in history and tradition. Each season, our aim is to assimilate new faces with established players to form a committed and cohesive unit, both on and off the field. Discipline, organization and communication guide our daily work, and it is the responsibility of the group to internalize these principles if we are to be successful.

At the varsity level, Blair faces a grueling schedule as a member of the Mid-Atlantic Prep League (MAPL) and a participant in the highly competitive New Jersey prep “A” division. Fielding a schedule of approximately 18 games, including the much-anticipated Peddie Day match, Blair soccer requires intense physical and mental preparation. Thus, fitness is crucial to the success of the team and, under the guidance of our coaching staff, our players train extremely hard to achieve peak condition.

Blair also maintains successful JV and 3rds programs, providing opportunities for future varsity players to mature and develop, while also affording students the chance to participate and enjoy the sport at an appropriate level. The teams play approximately 15 games against our MAPL rivals and a number of local high schools. Both JV and 3rds end the fall season on Peddie Day. 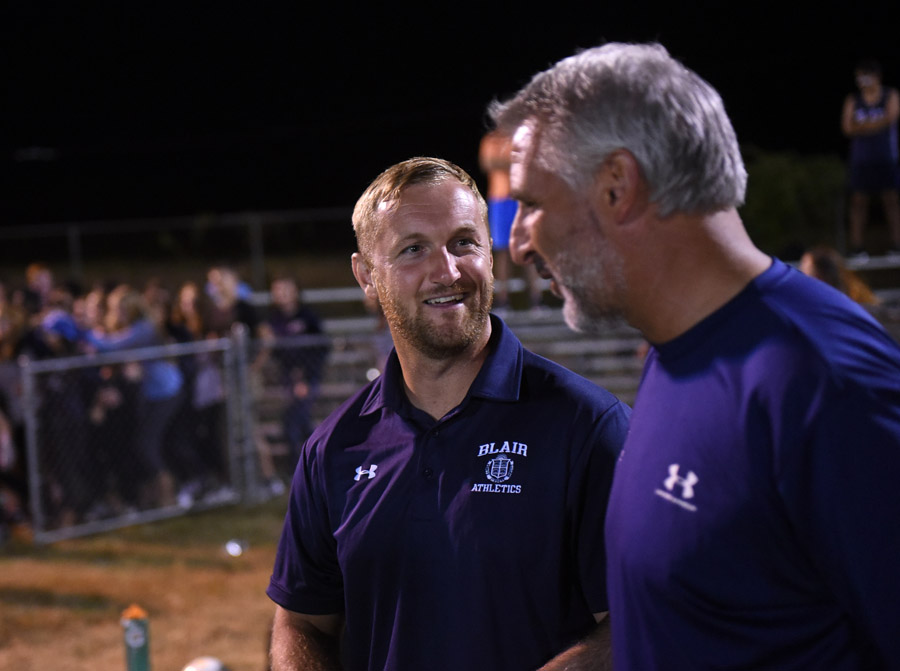 He brought a wealth of coaching, team development and mentoring experience to this role, having served as assistant men’s soccer coach at Centenary College in Hackettstown, New Jersey, as program head and trainer for Mount Olive Premiere soccer program and as a staff member of the National Soccer Coaches Association of America.

Coach Farrell holds a UEFA A coaching badge and is a New Jersey Olympic Development Program coach. He is also a director of Advanced Total Soccer Coaching, a New Jersey-based organization that works with soccer clubs on player development from foundational skills through elite national level competition.

Assistant coach Tom Parauda is an English teacher who joined Blair's faculty in 1988. In addition to teaching classes, he is a monitor and the School's daily academic coordinator. Tom completed his undergraduate work in English and philosophy at Fordham University in Bronx, New York, in 1986 and went on to earn an MA in British and American literature from Columbia University in New York City in 1987. He is assistant coach of both the varsity boys' soccer and basketball teams. Tom does dorm duty in the new boys’ dormitory and lives in Millbrook Cottage with his wife, Christine, who is director of The Romano Gallery.

The varsity boys' soccer team had the best performance of the year defeating rival Peddie with a final score of 3-1.

The varsity boys' soccer team battled hard this past Saturday against the Lawrenceville Big Red. Unfortunately, the Bucs fell short of the win with the final score of 3-5.

The boys’ varsity soccer team had their first game of the 2019-2020 season against Passaic Charter School and won with a final score of 9-0.

Blair soccer is rich in history and tradition. We maintain three levels of competitive, interscholastic soccer (varsity, junior varsity and 3rds), providing opportunities for players at all levels to participate in and enjoy the sport, while also giving future varsity players the chance to mature and develop.

Like the varsity team, the JV team plays against Blair’s Mid-Atlantic Prep League (MAPL) rivals and a number of local high schools. The soccer season culminates on Peddie Day in mid-November, when each of Blair’s fall athletic teams vies with Peddie for the coveted Kelley-Potter Cup.

Robert Brandwood, appointed in 1985, teaches freshman- and senior-level English. He graduated from the University of Wales U.K., with a bachelor of arts degree and earned a postgraduate certificate in education from Leicester University, U.K., followed by a master’s in English from Middlebury College. Prior to coming to Blair, Bob taught English in a government school in northern England and, for two years, in a small village school on the edge of the Kalahari Desert. During his tenure at Blair, Bob has taught at every grade level and had a hand in shaping the course of study currently adopted by the English department. He also coaches boys' soccer and swimming and serves dorm duty in Annie Hall.

Allan Issenchmidt comes to Blair as a spanish and french teacher in the language department. Additionally, he serves as the assistant ski coach and assistant boys' JV soccer coach. Previously, he was a JV and varsity soccer coach at the St. Paul School for four years, and also has coaching experience in middle school basketball for two years. A graduate of the Université d’Avignon in France, Mr. Issenchmidt has been an avid skier for the past 15 years.

Blair soccer is rich in history and tradition. We maintain three levels of competitive, interscholastic soccer (varsity, junior varsity and 3rds), providing opportunities for players at all levels to participate in and enjoy the sport, while also giving future varsity players the chance to mature and develop.

Like the varsity team, the thirds team plays against Blair’s Mid-Atlantic Prep League (MAPL) rivals and a number of local high schools. The soccer season culminates on Peddie Day in mid-November, when each of Blair’s fall athletic teams vies with Peddie for the coveted Kelley-Potter Cup.

History teacher Quinten Clarke '87 joined Blair's faculty in 2001. He currently teaches global issues and constitutional law, a course he developed, and serves as head coach of boys' 3rds soccer team. Over his years at Blair, Quint has been the international monitor, taught in the English and religion departments, and coached a number of other sports. He completed  his undergraduate work at Rutgers University in 1991 and earned his JD from Rutgers University School of Law in Camden in 1994. Prior to beginning his teaching career, he clerked for Judge Ronald Graves in Newton, New Jersey, worked as an associate attorney at the law firm of Laddey, Clark and Ryan in Sparta, and served as an adjunct professor at Sussex County Community College. Quint founded “Blair in Kenya” in 2005, an independent nonprofit that operates two schools in Kenya and works to improve the lives of the African nation’s rural poor. He and his wife, Blair English and health and wellness teacher Sarah O’Neil, reside in Marcial House.

A Spanish teacher with 16 years’ experience at the elementary, secondary and post-secondary levels, Jaime Mundo joined Blair’s language faculty in 2017. He earned his bachelor’s degree in Spanish language and culture at the University of Puerto Rico (2001) and his master’s degree in Spanish language at the City University of New York (2012). Currently a doctoral candidate, Mr. Mundo is completing his dissertation at the University at Albany SUNY, in the school’s department of languages, literatures and cultures. At Blair, he teaches Spanish, coaches JV baseball and oversees weight training.