A high-school boys' basketball team that is fundamentally sound, mentally tough and unselfish will always have a chance to win. To what degree will largely be determined by the talent level and the commitment of the players and the demands placed on the team by the coaching staff on a daily basis. We will be a top basketball program where simplicity and execution will be emphasized, and the demands of the coaching staff will be abundantly clear.

Defensively, we believe in laying a foundation of quarter-court man-to-man defense. Our defense will be the cornerstone of our program. A player who cannot play our brand of aggressive defense will not be able to play regardless of his offensive prowess. We believe in man-to-man defense because it calls for individual accountability, which in turn, strengthens our total defensive concept. Also, it creates a high intensity level every day in practice, which leads to championship habits. Our overriding philosophy will be to guard the arc and give up few easy shots. Our defense will be relentlessly physical and technically sound given time. We will bump every cutter, put great pressure on the ball and finish every defensive possession with a checkout. In short, we will try to dictate the game to the offense.

Offensively, we will look to be very aggressive and quickly push the ball up the floor on both makes and misses to gain numeric advantages that lead to easy shots in transition. If our transition game is neutralized, we will flow into a half-court motion and quick-hitter offense. We will teach some set plays, but more importantly, we will teach players HOW to play. This style puts a premium on individual offensive development and role identification. This offensive system is by no means a democracy, the best players will get more shots and every player must be made quickly aware of both his strengths and weaknesses.

Basically, we feel that basketball, at its simplest, is a game of percentages. Our defense will attempt to force low percentage, contested shots. In so doing, our aim is to be physical and disciplined enough to limit both our opponents’ second shots and transition hoops. Conversely, our players will possess the knowledge of how to play, they will be driven to constantly improve their skill level, and they will be disciplined to limit their turnovers and create high-percentage scoring opportunities. We believe this formula combined with a continued personal off-season commitment and a talented group of young people with a positive attitude can lead to more Basketball Banners in Hardwick Hall.

Beyond basketball, Blair athletes strive for excellence in the classroom and as citizens and leaders of our close-knit community. Blair's rigorous college-preparatory academic program gives our athletes the opportunity to develop to their highest potential as scholars, enabling their future success off the court as well as on.

Inquire today or contact Coach Mantegna at mantej@blair.edu to learn more about the basketball program and other high-school sports at our dynamic private school in New Jersey.

Blair has helped six former players go to the NBA and was the only school in the country to put two players (Luol Deng ’03 and Charlie Villanueva ’03) in the 2003 McDonald’s All-American Game. Six Blair alums have played in the NCAA Final Four, more than 60 Blair players have ended up on Division I rosters in the last 21 years, ten former players have played professionally overseas and a number of former players coach at the NBA, NCAA and prep school levels as well.

Before arriving at Blair, Coach Mantegna served as an assistant coach at four colleges in an eight-year span, including three years at both Boston University and Lehigh University. In addition, Coach Mantegna has run the Joe Mantegna Basketball School for the last 28 years in Northampton, Massachusetts, as well as the Wednesday Workouts, Buccaneer FUNdamentals Basketball School and Elite Skills School in Blairstown, New Jersey, for almost two decades.

In 2014 and 2016, Coach Mantegna served as defensive coordinator for the U.S.-Select U-18 team in the U-18 World Championships at the Albert Schweitzer Games in Germany. In 2018, he was head coach of that same U.S.-Select team. Additionally, Coach Mantegna teams with Luol Deng to run the basketball instruction at both the Deng Top 50 Camp in London, England, and the Luol Deng Invitational Camps each summer for student athletes of South Sudanese descent in various North American sites and in Melbourne, Australia. Coach Mantegna has also lectured at basketball camps and coaches’ clinics throughout the United States, Canada, the United Kingdom and Australia, while also hosting the annual College Coaches Roundtable each June on Blair’s campus. Finally, he regularly serves as a featured speaker for USA Basketball Coach Academy in Boston, New York City, Philadelphia and Atlanta, where young coaches learn to become USA Basketball-certified teachers of the game.

Coach Mantegna lives on campus with his wife, Shelly, and their three children. In addition to his coaching duties, he serves as Blair's Associate Dean of College Counseling and director of testing. He can be reached at (908) 362-6121, ext. 5619, or mantej@blair.edu.

A 1986 graduate of Fordham, assistant coach Tom Parauda is an English teacher who joined Blair's faculty in 1988. In addition to teaching classes, he is a monitor and the School's daily academic coordinator. Tom completed his undergraduate work in English and philosophy at Fordham University in Bronx, New York, in 1986 and went on to earn an MA in British and American literature from Columbia University in New York City in 1987. He is assistant coach of both the varsity boys' soccer and basketball teams. Tom serves dorm duty in Lakeside and lives in Millbrook Cottage with his wife, Christine.

Prior to coming to Blair, Coach DeJesus served as varsity head boys' basketball coach at his alma mater, East Stroudsburg North High School, in Dingmans Ferry, Pennsylvania. In three years, he rebuilt the program and his time there culminated in winning the 2016-2017 district 5A boys' basketball championship and a state playoff game (both of which were firsts for the school). The team then advanced all the way to the sweet 16 of the PIAA state playoffs before falling to Spring Grove High School.

In past seasons, Coach DeJesus has worked at numerous camps, including those run by Bob Hurley and Kevin Boyle, and has become heavily involved with the prestigious Hoop Group Elite, Skill and top-100 camps across the East Coast. At present, he is coaching one of the top Amateur Athletic Union programs in the country, the PSA Cardinals, on the Nike EYBL circuit during the spring and summer. He is currently head coach of the 15U team.

As an athlete at East Stroudsburg North High School, Coach DeJesus was a two-time all-conference and 1st-team all-area player who went on to help the Lackawanna College team win two region XIX championships and achieve a ranking in the top 10 in the country for NJCAA. After receiving an athletic scholarship to attend Bloomsburg University, he went on to become a two-year letter winner before a career-ending knee injury sidelined him during his senior year.

Coach DeJesus and his wife, Saskia, reside in East Stroudsburg with their two children, Gianna and Zaden. In addition to his coaching duties, he serves as the administrative assistant in Blair's Student Life Office. He can be reached at (908) 362-3120, or dejesj@blair.edu.

The varsity boys' basketball team opened their MAPL season with Peddie this past Wednesday. They defeated the Falcons 103-62, resulting in a dominant victory with many Blair contributors.

This past Sunday, the varsity boys' basketball team traveled to New York City to compete in the Empire Invitational. In a hard-fought battle, the Bucs defeated state-ranked St. Peter's Prep 53-46.

The boys' varsity basketball team traveled to Babson College in Massachusetts this past weekend for the Scholar Roundball Classic. Blair defeated Berkshire School 76-58 on Saturday, followed by a 60-56 win over Loomis Chaffee on Sunday.

View more photos from the 2021 season on Blair's Photoshelter.

Making the Decision to Come to Blair

Will Scott ’04
University of Louisville

Zach Kent '17
The University of Tennessee 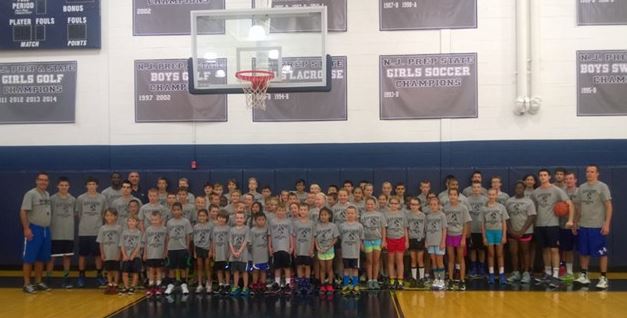 Grit - A Blair Basketball player should strive to conduct themselves on and off the court with courage, determination, tenacity and resilience.

Gratitude - A Blair basketball player should have the perspective to appreciate every day and every opportunity afforded to them.

Joyfulness - A Blair Basketball player should never lose sight of the fact that basketball is only a game and should be at it's core a fun and joyful experience to share with one's teammates.

Selflessness - The Blair Basketball Cause Over Self motto is at the very core of all that we do.  We always value the team over any selfish motives.

A boys' basketball team that is fundamentally sound, mentally tough and unselfish will always have a chance to win. To what degree will largely be determined by the talent level and commitment of the players and the daily demands placed on the team by the coaching staff. Blair's JV basketball program emphasizes simplicity and execution; the demands of the coaching staff are abundantly clear.

Rhett Moroses (‘13) returns to Blair after completing his undergraduate degree in Sport Management and M.Ed in Athletic Administration from Endicott College. He is the assistant athletic director and head junior varsity boys' basketball Coach.

While attending Blair, Moroses was a member of the 2012-2013 varsity boys' basketball team under Coach Mantegna. He has coaching experience in the aau and youth levels of basketball.

David Mamukelashvili is an assistant coach of the  junior varsity boys' basketball team. Additionally, he teaches English and serves as head coach of the girls’ varsity soccer team at Blair. He joined Blair’s faculty in 2018 following a year as an English teacher and social media coordinator at The Patrick School in Hillside, New Jersey. David double-majored in philosophy and art history at Bard and played varsity soccer and tennis. He also served as a tutor in the Bard Prison Initiative program and helped run Bard’s soccer camp.

RSS Feeds Subscribe to Alerts
There are no resources to display

A boys' basketball team that is fundamentally sound, mentally tough and unselfish will always have a chance to win. To what degree will largely be determined by the talent level and commitment of the players and the daily demands placed on the team by the coaching staff. Blair's 3rds basketball program emphasizes simplicity and execution; the demands of the coaching staff are abundantly clear.

There are no resources to display