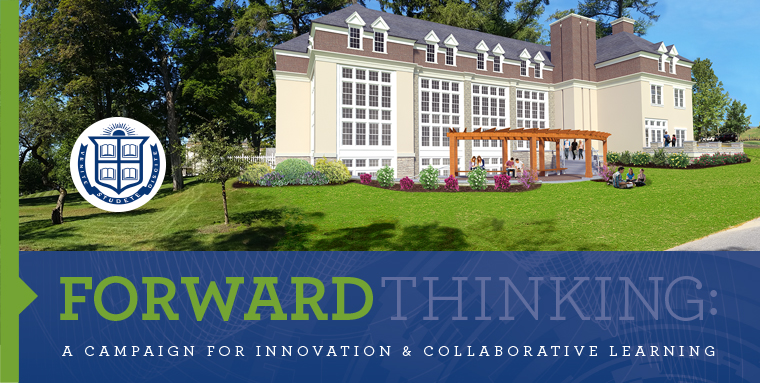 As Blair continues to integrate even more collaborative and project-based work into its curriculum, the School launched an academics-focused campaign to support three building and renovation projects. Among the campaign's goals are to amplify learning, foster deeper relationships across campus, and enhance the Blair experience for all students.

Read more details on the three building projects included in the "Forward Thinking" campaign in the tabs below.

The centerpiece of the campaign is the construction of the Chiang-Elghanayan Center for Innovation and Collaboration, a dynamic and forward-thinking academic facility designed to inspire creativity, promote innovative thinking and collaborative learning, and connect classroom study to real-world challenges. The Chiang-Elghanayan Center opened at the start of the 2017-2018 school year and is home to Blair’s fine arts and technology departments, positioning these disciplines for integration throughout our curriculum.

Construction of the Chiang-Elghanayan Center has also allowed for the realignment and repurposing of spaces in two existing Blair academic buildings, Bogle Hall and Weber Hall to better facilitate the teaching of mathematics and science.

Learn more about naming opportunities in the the Chiang-Elghanayan Center, Bogle Hall and Weber Hall.

Opened in September 2017, the Chiang-Elghanayan Center for Innovation and Collaboration promotes the exchange of ideas and project-based learning, complementing and enhancing work being undertaken in existing academic buildings.

The Chiang-Elghanayan Center serves as the home of Blair’s fine arts department, which gained significant square footage in its move from Weber Hall, and, for the first time, the School’s technology classes are housed under one roof in well-equipped, dedicated space.

With its open architecture and highly configurable spaces—including two media labs, an art studio, a maker space and fully equipped technology classrooms readily accessible to all students—the Chiang-Elghanayan Center is a venue where ideas come to life.

Occupying prominence of place at the crest of Blair’s front hill, the building’s exterior slate, stucco and stone features blend seamlessly with nearby Insley, Kathryn and Lakeside Halls—while its interior aesthetic, defined by flexibility, transparency, movement and light, is unlike that of any other building on campus.

The atrium-ceilinged Collaboration Forum is one of the Chiang-Elghanayan Center's signature spaces. This large, central, semicircular open area is furnished with white boards and comfortable, modular seating, which allows for the convening of large and small groups to work across disciplines. In keeping with the Chiang-Elghanayan Center’s aesthetic, the Forum will is ringed by windows that provide views of campus as well as into the glass-walled conference and team rooms that surround it.

Watch a video tour of the Chiang-Elghanayan Center's interior spaces below.

Relocation of fine arts classes to the the Chiang-Elghanayan Center for Innovation and Collaboration has allowed for the repurposing of Weber Hall solely for the teaching of mathematics. Math was previously taught in four buildings on campus, and centralizing math students and faculty in a single location has facilitated greater opportunities for collaboration and fostered the exchange of ideas. Construction was completed in September 2017 and Weber now features six optimally designed mathematics classrooms, a first-floor departmental office, and first- and second-floor study areas.

Learn more about the repurposing of Weber Hall.

With technology and math classes housed in the Chiang-Elghanayan Center for Innovation and Collaboration and Weber Hall, respectively, Bogle Hall was enlarged and renovated to create a spacious, state-of-the-art science facility. The Bogle Science Center, completed in 2019, fully supports analytical and inquiry-based learning in the laboratory sciences.

The facility boasts a three-story addition that includes new classroom-labs (CLABs) for AP physics and AP biology; an AP chemistry classroom and adjacent analytical chemistry lab; and a dedicated lab for Blair’s Integrated Science Research (ISR) program. Meanwhile, all existing classrooms and labs were renovated and upgraded with leading-edge technology.

Blair’s science department has gained new capabilities in the Bogle Science Center, including dedicated research space, where ISR students engage in sustained independent projects and collaborate with outside experts. Faculty members continue to implement elements throughout the curriculum that deeply immerse students in the science behind the theory they learn in class.

Learn more about the repurposing of Bogle Hall and watch a video tour of the building's interior spaces below.

Blair students and faculty will realize a host of benefits when these projects are complete: